Today, Matrix, a brand of MiX Telematics – a leading global provider of fleet and mobile asset management solutions – announced its commitment to a one year sponsorship of the bizhub Highveld Lions.

MiX Telematics joins the team as an associate sponsor alongside its naming rights sponsor and media partners. The Matrix logo will feature on the collar of the team’s playing shirt in all competitions.

“There is no doubt that a successful team is made up of individual commitment to a larger objective. Whether in a business environment or on the sports field, it takes commitment, endurance, passion and creativity to make a good team a great one. We are very excited about this sponsorship and believe that it not only enables the bizhub Highveld Lions to reach their team goals, but demonstrates strong synergies between two successful, leading and consistently growing brands locally,” says Grant Fraser, Product and Marketing Director at MiX Telematics (Africa). 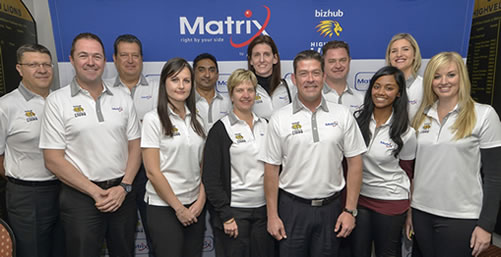 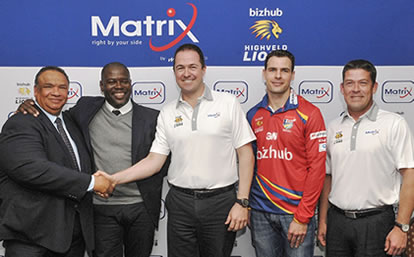 MiX Telematics is an associate sponsor and will fulfil a number of business and sponsorship tactics, adding value to not only the team but also the fans that loyally support them.

Supporters attending home matches at Bidvest Wanderers and Senwes Park will have the opportunity to take advantage of specials and competitions, including The Matrix Six. The Matrix Six will provide one lucky supporter the chance of winning R25 000 for catching the Matrix branded ball, hit by a bizhub Highveld Lions player (T’s & C’s apply). Via a lucky draw, supporters attending home matches at the Bull Ring  can win a Matrix device and subscription, or discounts on Matrix purchases. In addition, specials will be on offer to Matrix customers for tickets bought to home games at Bidvest Wanderers.
Specials and competitions will be announced on the bizhub Highveld Lions and Matrix social media platforms throughout the season.

“We are certainly excited that MiX Telematics has come on board as a lead sponsor, where not only are they providing much needed funds to ensure the success of the team, but is a company that shares the same vision and goals as ourselves – striving for excellence,” says Greg Fredericks, CEO of the Highveld Lions.

The domestic cricket season kicks off on the 9th September – where the bizhub Highveld Lions will play their first game against the Unlimited Titans in Pretoria in the annual Momentum eKasi Challenge.

“This cricket season promises to be a very exciting one and we are looking forward to witnessing the Lions take on the rest of the country with pride and confidence as they wear the MiX Telematics brand as proudly, as they do their own,” adds Fredericks.

“We are very honoured to be part of this year’s cricket season and we hope that the support we are providing will go a long way in demonstrating MiX Telematics’ commitment to excellence. We wish the Highveld Lions team the very best for the season ahead – we are behind you all the way!” concludes Fraser.

Note to editors:
Please click here to see a full list of bizhub Highveld Lions fixtures for the 2015/2016 season.

About MiX Telematics
MiX Telematics is a leading global provider of fleet and mobile asset management solutions delivered as SaaS to customers in over 120 countries. The company’s products and services provide enterprise fleets, small fleets and consumers with solutions for safety, efficiency, compliance and security. MiX Telematics was founded in 1996 and has offices in South Africa, the United Kingdom, the United States, Uganda, Brazil, Australia and the United Arab Emirates as well as a network of more than 130 fleet partners world-wide. MiX Telematics shares are publicly traded on the Johannesburg Stock Exchange (JSE: MIX) and on the New York Stock Exchange (NYSE: MIXT).

About Bizhub Highveld Lions
The bizhub Highveld Lions can be found in their two lairs at the Bidvest Wanderers Stadium in Johannesburg and Senwes Park in Potchefstroom. The team has two major shareholders in Gauteng Cricket Board (majority shareholder) and North West Cricket. Primarily based at the Bull Ring (Bidvest Wanderers Stadium) in the City of Gold, the team has some firing youngsters that blends well with  a solid base of experience from the more senior players – ensuring that the players stepping across the boundary rope, has the perfect balance to achieve victory.